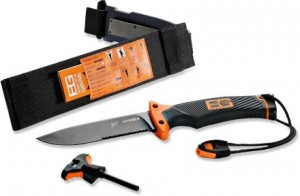 When camping it pays to bring along a few survival essentials. You probably wont ever need them, but if you do one day need to pull them out, you’ll be extremely glad that you bothered to pack them. And when deciding on what survival essentials to bring camping with you, camping survival knives are an excellent idea. A knife is a versatile tool that can be used in any number of different ways when you’re in the outdoors. Many survival knives also come with things like flints and whistles built in to them, to further enhance the usability of the knife.

Features to look for when you are reviewing camping survival knives.

Some of the very best camping survival knives out there on the market right now.