76 | 4
Compare the 0 Snowshoes on Ten Pound Backpack based on their weight, price and a few more features as well. 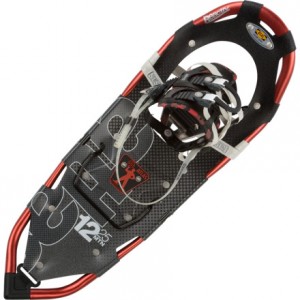 If you’ve never done much research in to snowshoes you might think that all snowshoes are alike, that maybe there are men’s snowshoes and women’s snowshoes, and that’s about it. But there are in fact several types of snowshoes, each with certain strengths and weaknesses, that are best suited for certain conditions. Big, durable snowshoes that are intended for trekking through the mountains with a backpack on, for instance, would not be the snowshoes that you would want to go running in.

The three broad categories that just about all snowshoes fit in to.

With running snowshoes the goal is usually as lightweight a snowshoe as possible. Most runners don't go running in heavy boots or shoes, and most runners would also not go running in heavy snowshoes. Snowshoes also have a tendency to flop around, which can be a serious hamper when you're trying to maintain a good gait. So it's best to get running snowshoes that address this issue in some way.

The Atlas Race snowshoes are a great example of a running snowshoe. At 2 pounds 1.3 ounces, or 943 grams, you wont find any lighter running snowshoes on the market. They go so far as to use a superior grade of aluminum to save a few ounces. Atlas also has a spring loaded suspension system that helps make the snowshoes compatible with a runners gait. So a great choice if you want to go running with snowshoes on. Atlas also makes a cheaper, and slightly heavier option called the Atlas Run snowshoes, also ideal for runners.

Backcountry snowshoes represent the other end of the spectrum from the running snowshoes. They're bigger, to accommodate a heavy backpack, and usually have more and better crampons, so that you don't lose traction when you're on steep, uneven terrain. Backcountry snowshoes also often have a heel lift bar, which helps relieve a little of the leg fatigue that can result from walking in snowshoes for long periods of time.

The Atlas 12 Series snowshoes are a great example of a backcountry snowshoe. They come in a variety of different lengths, all the way up to the 35 inch length, which will carry an impressive load of 300+ pounds, which enough capacity for the average person plus a heavy backpack. A heel lift bar and some solid crampons help round out the package. The Atlas 12 series snowshoes also use higher quality aluminum for the frame, and weigh an average of 4 pounds 5 ounces, or 1.95 kilograms. MSR makes another excellent backcountry snowshoe, called the MSR Lightning Ascents.

If you're just interested in some recreational snowshoeing then a general hiking snowshoe is ideal. These snowshoes occupy the middle ground between running snowshoes and backcountry snowshoes. They're usually relatively lightweight, and have crampons sufficient for trails and maybe a few forays in to uncharted territory. They often lack more advanced features, however, like heel lift bars.

When it comes to general hiking snowshoes, the MSR Evo 22 snowshoes are an excellent choice. They're plastic, rather than an aluminum frame and nylon deck. Plastic has two benefits, one being that it's cheaper, and the other being that it weighs less. At just 3 pounds 7 ounces, or 1.55 kilograms, these are one of the lighter pairs of snowshoes on the market in the hiking category. They also have some fairly good crampons, making them well suited to getting off the beaten trails. They will only carry a maximum of 180 pounds, but there are optional tails that will extend that to 250 pounds.