66 | 5
Compare the 0 Snowshoes on Ten Pound Backpack based on their weight, price and a few more features as well. 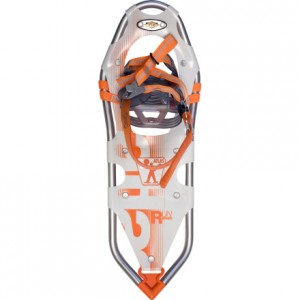 Snowshoes may initially seem like slight variations on the same basic design, but snowshoes are actually a fairly complex piece of gear with quite a few variables to take in to account. It can be very useful, then, to compare snowshoes before buying, so that you understand what is available to you, and also what will best suit your specific needs. One of the most important things to know about snowshoes is that there are a few kinds of snowshoes available, each of which is best suited to specific conditions.

The three main categories that snowshoes fall in to.

First, there are the small, lightweight running snowshoes. These are ideal for running in, obviously, but also for gentle trails that are ideally either packed or groomed in some way. The main feature to pay attention to when comparing running snowshoes is the weight of the snowshoes. You don't want to be dragging around big, ungainly snowshoes while trying to run. It just wont work.

When it comes to running snowshoes, the Atlas Runs are a fantastic choice. At 2 pounds 11 ounces, or 1.22 kilograms, they're respectably lightweight. Besides that, Atlas has a great spring loaded suspension system that gives you a more natural gait, so that your snowshoes aren't flopping around while you're running. They'll carry a maximum of 190 pounds, and are unisex. There's also a lighter, but more expensive version of these snowshoes, called the Atlas Races.

At the other end of the spectrum from running snowshoes are backcountry snowshoes, or mountaineering snowshoes. The most important features to compare on backcountry snowshoes are the crampons,which there should be plenty of, to give you traction on steep slopes, and then the maximum weight. If you're in the backcountry you're likely carrying a backpack, and you need snowshoes that have a maximum weight big enough to carry both you and your backpack. Otherwise you sink in to the snow, rather than staying on top.

For backcountry travel, something like the Atlas 12 series will do a great job. They come in three different sizes, which are 25, 30 and 35 inches long. The 35 inch version will hold an impressive 300+ pounds, which is more than enough for most people and a backpack. The 30 inch versions weigh 4 pounds 7 ounces, or 2.02 kilograms. These come with some great crampons, and crucially a heel lift bar, which helps when you're going up. And there's a women's version too.

If all you want to do is a little recreational snowshoeing, then a general hiking snowshoe will be a good fit. There's nothing to specific to compare when reviewing hiking snowshoes, but it's a good idea to get light snowshoes, instead of heavy ones, as heavy snowshoes will only tire you out faster.

For general hiking there are few snowshoes better than the MSR Evo 22 snowshoes. They're plastic, instead of the traditional aluminum frame and nylon deck. Plastic is a good choice because it is both less expensive and lighter. At 3 pounds 7 ounces, or 1.55 kilograms these are an impressively lightweight pair of snowshoes. They'll only carry a total of 180 pounds, but there are optional tails that can be attached, which will improve that maximum weight to 250 pounds.