56 | 3
Compare the 0 Snowshoes on Ten Pound Backpack based on their weight, price and a few more features as well. 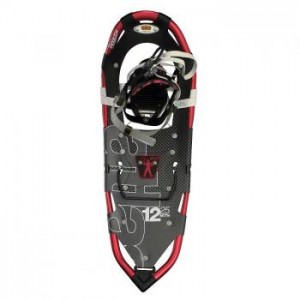 The three major categories that exist when it comes to snowshoes.

For general hiking, there's few snowshoes better than the MSR Evo 22s. They're plastic, but plastic is good in a few ways. First, it's a lightweight material. At 3 pounds 7 ounces, or 1.55 kilograms these are some of the lighter hiking snowshoes around. Plastic is also quite a bit cheaper than the standard aluminum frame and nylon deck combination. These particular snowshoes will only hold up to 180 pounds, but you can get attachable tails that will improve that to 250 pounds.

For running snowshoes you're looking for something more specific. Running snowshoes should be, more than anything else, lightweight. Running is hard work, after all, and it's a lot harder when you've got something heavy strapped to your feet. With a pair of good, lightweight snowshoes, however, you will wont have to worry about exhausting yourself in the first few minutes of a run.

For running, there's no snowshoe better than the Atlas Race snowshoes. At just 2 pounds, or 907 grams, they're among the lightest snowshoes available, and use superior materials, like high quality aluminum, to achieve that weight. The bindings are a simple one pull system, and Altas has a spring loaded suspension technology that helps these snowshoes to not interfere with your natural running gait. If you're scared away by the price, Atlas makes another snowshoe, called the Atlas Run snowshoes, that is the same basic design and quite a bit cheaper, though also a bit heavier.

Backcountry snowshoes are something a little more complex. They usually have more, and better crampons, so that when you're climbing steep slopes you're not slipping back down the hill. Backcountry snowshoe also typically have what's called a heel lift bar, which helps with leg fatigue when going up. And finally, you'll need a snowshoe with a high enough weight capacity for both you and your backpack.

If you want something for the mountains, the Atlas 12 Series is an excellent choice. It comes in three different sizes, the largest of which will carry an impressive 300+ pounds, which is more than enough capacity for most people plus a heavy backpack. At 4 pounds 3 ounces, or 1.9 kilograms for the medium they're also a respectable weight. Some solid crampons and a heel lift bar round out the features, and make these a very solid backcountry snowshoe. There's also a women's version called the Atlas Elektra 12 Series.